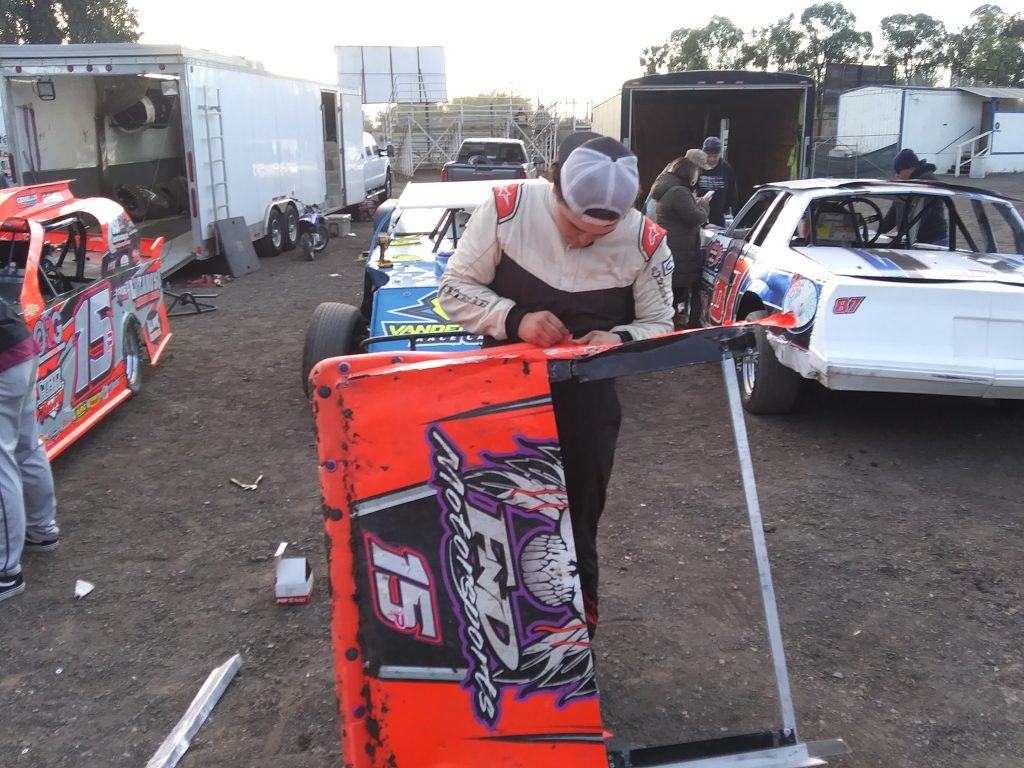 While the crew works on the front end damage of his car, Andrew Pearce is doing body work to get it ready for the Main Event. Photo by DCRR Racing Media

The popular IMCA sanctioned Modifieds and Sport Modifieds return to action this Saturday night at Antioch Speedway. The drivers were competing at another speedway for big money last week, but they will resume the point battles at the Contra Costa County Fairgrounds-based oval track this Saturday. Also in action will be the popular Pacific Coast General Engineering Hobby Stocks and the return of the Super Stocks.

One of the things drivers learn very quickly when they race for points is that every position counts and you never give up on an evening of racing. You can always gain something if you don’t quit. Young charger Andrew Pearce, who is coming off of a second-place finish at Merced, had a heat race issue at the most recent Antioch event.

With front-end damage, his evening was in doubt. However, his father Brian Pearce, and the crew went to work making repairs. Andrew came back out and salvaged a decent evening with a fourth-place feature finish.

When you’re competing against Fred Ryland, every point counts. Ryland won the Main Event that night, and to demonstrate what a force he is this year, Ryland went to Merced last weekend and won both the IMCA Sport Modified and IMCA Stock Car races. Everybody’s gunning for Fast Freddy, the two-time reigning champion. Drivers to keep an eye on this week include past champion KC Keller, Jacob Mallet Jr, Tommy Clymens Jr, and Mark Garner.

When last we saw the IMCA Modifieds two weeks ago, Kellen Chadwick was putting on a clinic as he beat the field by a full straightaway in victory. Chadwick was disappointed with himself after the season opener. He held a similar lead in that race, but somehow he let it slip away. The past Antioch champion, who has won some of the biggest races on the West Coast, got his redemption, but he’d like to back it up with another win on this occasion.

Nick DeCarlo competed in his father’s car last time out as he was planning a trip out of state after the race. The team maintains two cars, but they figured it would be easier to just run the one car. Nick is competing for points this year, and his win in the season opener was his first victory at Antioch in two years.

Nick bears the distinction of being the only driver to win IMCA Modified championships in Antioch, Watsonville, and Petaluma. Nick will be back this week, but with drivers like Jim Pettit II, Buddy Kniss, and Bobby Motts Jr in the field, he’ll have to bring his A-Game.

Motts led the early goings of the most recent feature. When Chadwick got by him, he still had a tough battle for the second half of the race. DeCarlo looked high and low, but Motts didn’t give up and scored the runner-up finish. The Motts family has been involved in racing for many years, and Bobby has had some very good moments at Antioch Speedway, including championships in both the IMCA Modifieds and Street Stocks.

The Hobby Stocks were so popular last weekend that most of the fans in attendance stayed all the way to the end to see how things would end up. The lead changed hands several times, but it was Ken Johns prevailing at the checkered flag. Also noteworthy was the drive turned in by second-generation competitor Angela Brown.

With some damage to repair to the rear end of her car, Angela’s feature start was in question. Speedway veteran Jim Robbins was helping in the pits. With everything repaired, she came out and earned her best-ever finish in third. Michaela Taylor was right behind her in fourth. Taylor recently celebrated her 17th birthday. One of the things Angela attributes to her improvement this year is her willingness to travel to other venues to better her driving style.

Street Stocks were a part of the Antioch roster going back to the 1970s, and the Hobby Stocks are the spiritual successor to that class. New drivers get their starts in this division. Some of the drivers who joined in the last couple of years have gotten very competitive. Larry McKenzie Jr may be the reigning champion, but he knows he’s got stiff competition with the likes of Jared Baugh, Grayson Baca, Jewell Crandall, Taylor DeCarlo, and James Graessle in the field.

After the season ended last year, it looked as if the Super Stock division was done. Former promoter John Soares added the class in 2000. At the time, this was the way to bring back some of the old Late Model chassis from the late 1980s and early 1990s. One driver instrumental in finding cars for some drivers was two-time champion Ron Brown, who made his season debut in a Hobby Stock last Saturday.

One of the instigators in securing another chance for this class was last year’s champion, Jim Freethy. Jim wanted to keep racing, and there were enough drivers there with him that management reconsidered and put them on the schedule for this Saturday night and next week. Two-time division champion Mike Gustafson, who is sure to be in the Hall of Fame in the future, will be in the field. Nobody’s won more Super Stock Main Events than Gustafson, who is also a past Sportsman title winner. Others to keep an eye on include 2020 champion Mike Walko, Joey Ridgeway Jr, Chad Hammer, and Michael Burch.

Saturday night’s show will bring plenty of excitement with this four-division lineup. Grandstands will open at 4:00 pm with the first race scheduled to fire off at 6:00 pm.