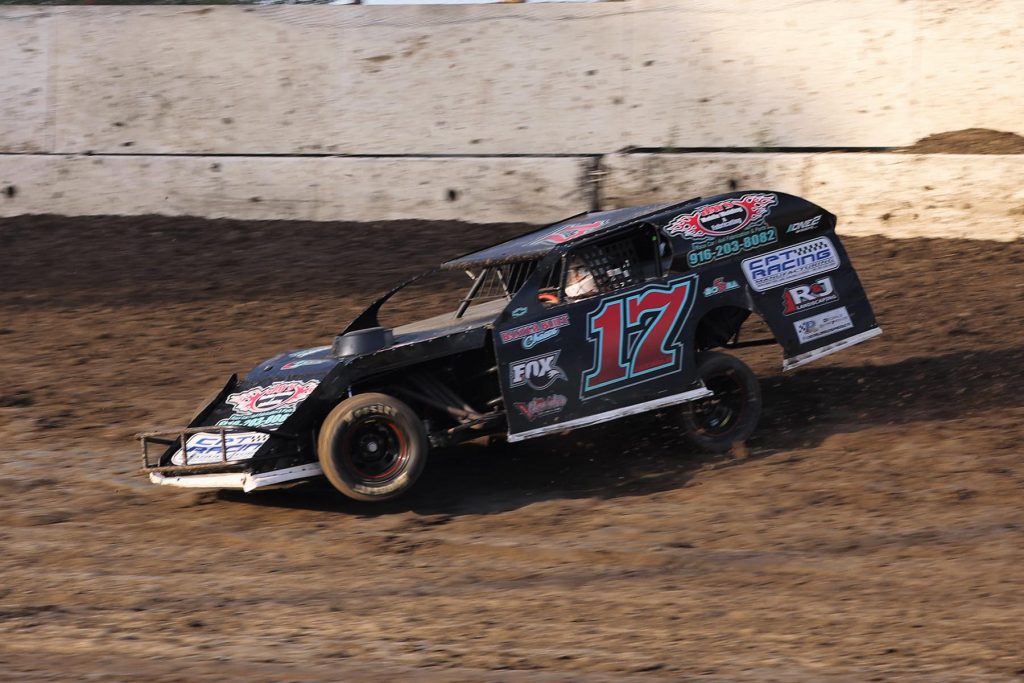 Nick DeCarlo won the 20 lap IMCA Modified Main Event Saturday night at Antioch Speedway. It was the second win of the season for the current point leader, and he overtook rookie Trevor Clymens to get the job done.

Clymens raced into the early lead ahead of Sean Wilson and Kenneth Robles. DeCarlo started deeper in the field, and Clymens had a straightaway advantage wiped out by a Lap 7 yellow flag. Clymens continued to lead Robles on the restart with DeCarlo already up to third. DeCarlo went around Robles on the front stretch to take second on the ninth lap. DeCarlo was working the outside groove very well and made an outside pass on the backstretch on the 12th lap to take the lead from Clymens. A late yellow flag bunched the field on Lap 17, but it didn’t stop DeCarlo. As DeCarlo charged on ahead of everybody else, Aaron Crowell made an outside pass in Turn 4 to take second from Clymens. DeCarlo got the win ahead of Crowell, and Bobby Motts Jr beat Clymens back to the checkered flag in a drag race for third. Robles settled for fifth.

Ryan Smith won an eventful 20 lap Super Stock Main Event. The division got a major boost when a race down south got canceled due to the weather, sending several drivers to Antioch Speedway. For the first 12 laps, Tri-State Pro Stock Series star Richard Brace Jr led as Ryan.Smith and. Chris Smith battled with Jay Sears for the second position. A backstretch pass on Lap 13 gained Ryan Smith the lead. Sears and Brace battled fiercely for second until Sears headed pit side on Lap 17. Ryan Smith went on to win ahead of Brace, Jim Freethy, Jimmy Robbins, and Chad Hammer.

Misty Welborn won the 20 lap Pacific Coast General Engineering Hobby Stock Main Event. On this occasion, she started on the front row and proceeded to lead all 20 laps in victory. Michaela Taylor gave chase early on before surrendering to Larry McKinzie Jr. When McKinzie had problems and stalled in Turn 1, he was clobbered in the rear end by Jewell Crandall for a Lap 9 yellow flag. Welborn led Taylor on the restart, leaving the battle for third. Aiden Ponciano held that position until being passed by Chris Long on Lap 18. Welborn won by a straightaway ahead of Taylor, Long, Taylor DeCarlo, and Ponciano.

Troy Foulger won the 20 lap IMCA Stock Car Main Event. He started in the back as Anthony Giuliani took the early lead ahead of reigning champion Travis Dutra. Foulger got up to third very quickly and made an inside pass in Turn 4 on Lap 4 to take second. Foulger worked on reeling in Giuliani. The duo ran a couple of side-by-side laps before Foulger went low in Turn 2 on Lap 12 to take the lead. Giuliani had a mechanical issue on Lap 16 for a yellow flag. Foulger led Dutra and Jason Robles on the restart, and they would finish in that order as Jason Jennings and Joe Gallaher completed the Top 5.

Racing continues next Saturday night with a visit from the WMR Midgets and the season debut for the Wingless Spec Sprints. Also competing will be the Delta Dwarf Cars and Mini Stocks. For further information, go to www.antiochspeedway.com.