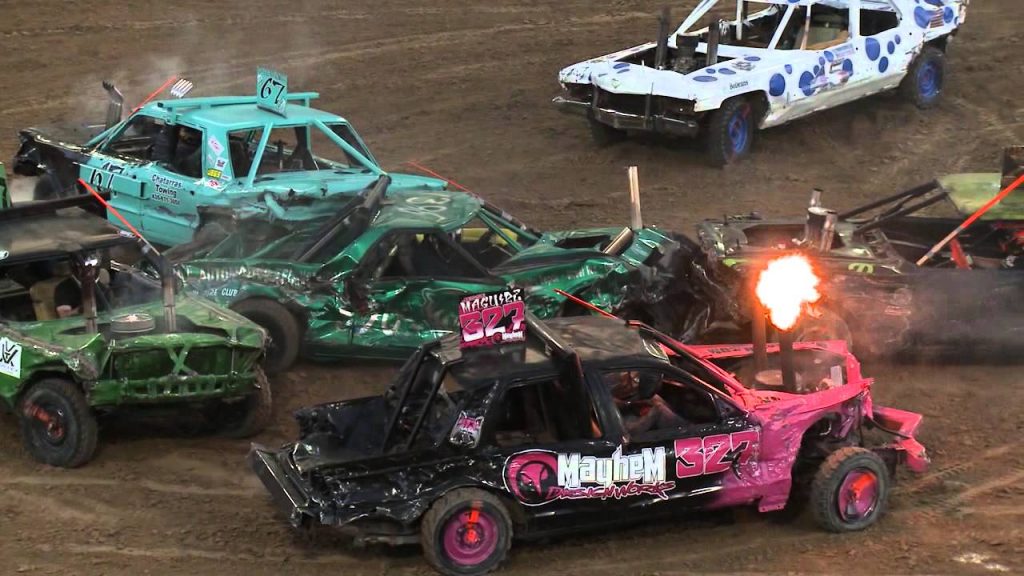 One of the yearly occasions that people have flocked to Antioch Speedway to witness through the years is the Destruction Derby. At some point during the Contra Costa County Fair, they have had a big Derby in the main grandstand arena.

Up until about the mid-1990s or so, the track would also have the occasional Destruction Derby to end a racing program, but the County Fair Derby was always something real special.

The purses were always just a little bit bigger, and the competitors, who traveled up and down the road together in some cases, would make it a point to be at this Derby. Drivers with last names like Reyes, Doyle, Cornwell, Palacious, and Slaney enjoyed the spirit of competition.

They took their efforts a little more seriously in the way they prepared their cars. These were the guys you knew would be competing for the money, and the local stars out for a few grins would usually be eliminated in a few hits.

At one time, we had the Dutch Holland Destruction Derby Tour. They traveled to some of these big County Fairs and promoted other big events. They kept points and Joe Reyes Sr was a highly decorated champion.

His son, Joe Reyes Jr, followed in his footsteps. In the 1990s, competitors like Mike Doyle, Tim Palacious, and Ken Cornwell, competed for the glory.

Destruction Derbies have not been a part of the Antioch Fair or even the regular shows in several years, but that changes this Saturday night.

A big Destruction Derby is on the schedule, and this will attract some of the best competitors to the arena. The fans will once again be treated to a type of entertainment that they used to flock to back in those days.

Car preparation is serious business for a Destruction Derby. Unless rules specify otherwise, the drivers can spend some time reinforcing their cars in vulnerable areas. They can make them stronger to take hits in certain spots and make them stronger when it comes to delivering hits.

This is what separates the real pros from the amateurs. An amateur competitor might just take an older car, which is the preference, but they don’t know how to prepare it right. They may eliminate themselves in the way to deliver the blows as their car gets used up within a few hits.

A Destruction Derby is about more than just delivering hits and smashing up cars. If you’re going to win, there is a way you do it. Your car will take some damage when you deliver a hit, so knowing the vulnerable spots on other cars is something an experienced competitor is well versed in.

You may not deliver the big hits on a car, but the smaller hits do damage. You loosen them up for the big blow. In some Destruction Derbies, you can work together in teams, and that makes this even more interesting to behold.

The fans in the grandstands watch in full delight as cars absorb the hits and are eliminated one by one, leaving the final two gladiators to decide who wins the big prize and who settles for second.

It’s a unique form of motorsports competition that requires skill and preparation to come out the victor when it’s all said and done. The fact that this event takes place with the always enjoyable County Fair in the backdrop makes it even more special.

To attend the Destruction Derby, you have to enter through the Fair entrance. Fair and Derby admission are $20 for adults and $15 for youths 6-13 years of age.

The grandstands will open at 4:00 with the event scheduled to start at 6:00. For further information, go to www.antiochspeedway.com, or visit the Antioch Speedway by PROmotions Facebook page.

The Monsters Are Coming!!!!