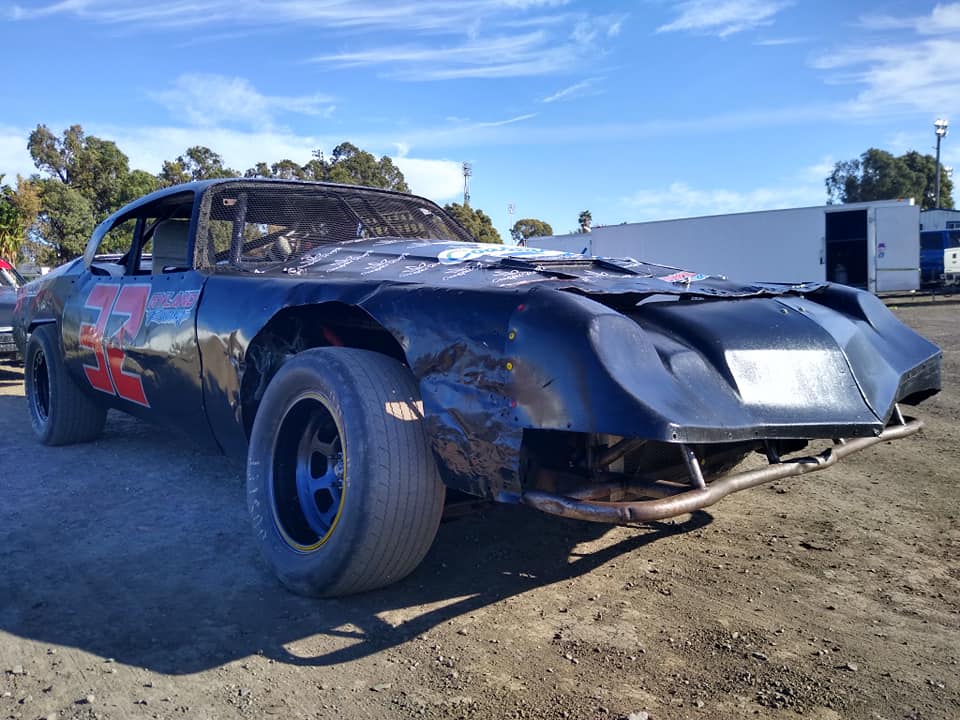 Ken Johns won the 25 lap Pacific Coast General Engineering Hobby Stock Main Event Saturday night at Antioch Speedway. Johns was rebounding from a night of mechanical issues at the opener for the class a couple of weeks ago, and he benefited from the misfortune of Brad Coelho and Grayson Baca.

Breck Smith led the opening lap before pushing high in Turn 2 and surrendering the point to Coelho. Reigning champion Larry McKinzie Jr took up pursuit of Coelo early on, but it was Baca taking the runner-up spot on Lap 12. A Lap 13 restart provided Baca the opportunity to steal the lead from Coelho. Coelho stayed tough in the battle, but things got a bit wild on Lap 18 when contact sent Coelho and Baca spinning. Johns suddenly found himself leading Angela Brown on the restart, and they ran that way until Coelho made a low pass in Turn 4 on Lap 24 to gain second. However, Coelho ran out of time as Johns brought it home a happy winner. Brown settled for her best-ever finish in third, followed by Michaela Taylor and Gavin Griffiths.

Danny Wagner won the 20 lap Delta Dwarf Car Main Event. This was the second-straight win for the two-time division champion. David Rosa took the early lead ahead of Eric Weisler. Chance Russell slipped past Weisler for second on Lap 3, but he surrendered the position to Wagner on a Lap 6 restart. Wagner chased Rosa until a Lap 10 restart gave him an opportunity to take the lead. Devan Kammermann followed Wagner into second, but he lost that position to Jack Haverty on a Lap 12 restart. Once Wagner got the lead, nobody was going to stop him as he won ahead Haverty, who barely held off Weisler for the second position. Russell and Kammermann completed the Top 5. Both Havertyy and Russell were disqualified in post-race tech, making the new Top 5 Wagner, Biscardi, Kammermann, Ellie Russo, and David Michael Rosa.

Dana Gardner jumped into the early lead in the race that was destined to go non-stop. Reigning Antioch and Petaluma champion Tom Brown settled into second on Lap 2 and made an inside move on the backstretch on Lap 5 to take the lead from Gardner. Miramontez found his way into second on Lap 9 and quickly started pressuring Brown. A low pass in Turn 2 of the 13th lap gained Miramontez the lead. The lead duo had to split a lapped car in the middle at that point, but everybody made it safely. Despite a scary incident in traffic with two laps to go, Miramontez kept his cool and held off Brown for the win. Gardner ended up third, followed by Shan Titman and Eddie Humphrey III.

Mitch Enos won the 15 lap California Sharp Mini Late Model Main Event. This was the debut of the class at Antioch. Matt Malcolm jumped into the lead at the start ahead of Enos. Malcolm pulled away a little bit for the first few laps, but Enos closed in by the midway point of the race. A low pass in Turn 4 on Lap 12 put Enos into the lead, and Malcolm spun in the same turn a lap later for a yellow flag. Enos led the restart, and Malcolm spun again in Turn 4 trying to make a pass. Enos won ahead of DJ Saenz and Malcolm.