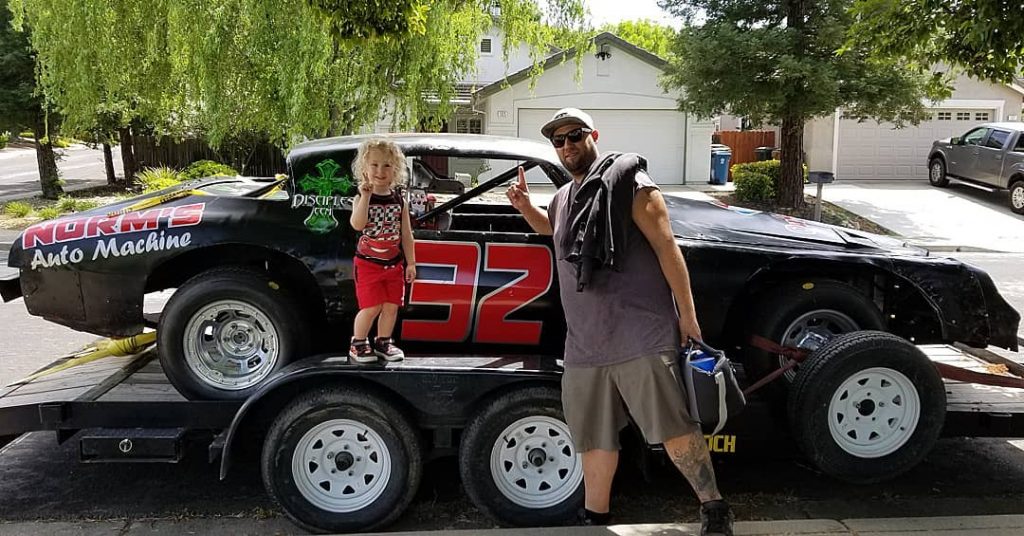 Ken Johns won the 25 lap Pacific Coast General Engineering Hobby Stock Main Event Saturday night at Antioch Speedway. Johns was rebounding from a night that saw mechanical issues sideline him very early, and he also benefited from a tangle between the leaders, which put him into the lead.

Breck Smith led the opening lap before pushing too high exiting Turn 2, handing longtime speedway racer Brad Coelho the lead ahead of reigning champion Larry McKinzie Jr and Charlie Bryant. A yellow flag waved on Lap 3 as Ron Brown spun exiting Turn 4. The first restart attempt was botched after Adam Kujala spun in the same turn. Coelho continued to lead McKinzie and Bryant on the restart. Grayson Baca had settled into fourth. A Turn 4 pass on Lap 5 put Baca into third, and a yellow flag waved for another Ron Brown spin in Turn 4 on Lap 8. Coelho continued to lead McKinzie and Baca on the restart. The yellow flag waved on Lap 11 for a Turn 4 tangle involving Smith, Jess Paladino and Anthony Vigna. Coelho remained the leader ahead of McKinzie and Baca on the restart, but Baca made an inside pass on the frontstretch a lap later to take second from McKinzie. Paladino spun in Turn 4 for a Lap 13 yellow flag. The restart lap saw Baca get a good run on the inside exiting Turn 4 to grab the lead from Coelho. Ken Johns gained third on Lap 14 as McKinzie had problems, and a yellow flag waved on Lap 14. Baca led Coelho and Johns on the restart. A yellow flag flew for Taylor DeCarlo in Turn 4 on Lap 15. Coelho took the lead from Baca on the restart. It was a wild Lap 18 incident that saw contact between Baca and Coelho send them both spinning for a yellow flag. Suddenly, Johns found himself leading Angela Brown and Jared Baugh on the restart. Michaela Taylor took third from Baugh on Lap 19, and a yellow flag slowed the pace for a Gene Haney spin on Lap 22. Johns led Angela Brown and Taylor on the restart, but Coelho made a big move on Lap 24 that saw him take second from Brown with an inside pass in Turn 4. However, Johns picked up the win ahead of Coelho. Brown had a career best finish in third, followed by Taylor. Baca crossed the line in fifth, but he was disqualified in post-race tech, moving Gavin Griffiths into the position, followed by DeCarlo, Paladino, Gene Haney, Shelby Asher and Danny Aves.

Danny Wagner picked up the win in the 20 lap Delta Dwarf Car Main Event. This was the second-straight win for the two-time champion, and the field got a boost by the visit of several drivers from the rival South Bay Dwarf Car Association.

Two-time Street Stock champion David Rosa jumped into the early lead ahead of South Bay racer Eric Weisler and Chance Russell. Russell slipped past Weisler for second on Lap 3, and a yellow flag waved for debris on the back straightaway on the sixth circuit. Rosa continued to lead the way on the restart as Wagner moved around Russell for second. Wagner kept it close before a yellow flag bunched the field on Lap 9 after a Kieran Costas spin in Turn 4. The first restart attempt saw Sean Catucci spin in the second turn. The next time around, Wagner took over the lead ahead of Devan Kammerman and Jack Haverty. Haverty took second from Kammeraman on a Lap 12 restart. Weisler motored past Kammeraman for third on Lap 18. Wagner went on to take the checkered flag ahead of Haverty, Weisler, Russell and Kammermann. With the post race disqualifications of Haverty and Russell, Wagner got the win ahead of Weisler, Kammermann, Ellie Russo, David Michael Rosa, Barry Waddell, Catucci, David Rosa, Pete Piatanida and Tom Van Tuyl. There were 20 Dwarf Cars in action with Haverty, Russo and Wagner picking up eight lap heat race wins.

Randy Miramontez won the 20 lap Mini Stock Main Event. Miramontez started his career in Mini Stocks out at Petaluma, and he was the Super Stock champion at that track last season. He made the decision to bring his Mini Stock out to Antioch, rather than running his local track, and he denied reigning Antioch and Petaluma champion Tom Brown the win.

Dana Gardner jumped into the early lead ahead of Shan Titman and Brown. Brown made an inside pass on the backstretch on Lap 2 to take second and set his sights on Gardner before making a pass on the inside down the backstretch on lap fifth for the lead. Miramontez gained third on Lap 3, and it was a close three-car battle up front at that point. Miramontez made a low pass in Turn 4 of the eighth lap to take second from Gardner, and the battle was on at the front of the pack. Traffic became a factor in that battle as the lead duo ran side by side on Lap 13. They split a slower car a lap later with Miramontez making a low move in Turn 2 to take the lead. Though Brown kept it close, Miramontez would prevail at the checkered flag. Gardner was the final lead lap finisher with Titman fourth, followed by Eddie Humphrey III, Daisy Eszler, Laina Bales and Ryan Graham. Dan Abitz was eliminated in a heat race crash, and those eight lap races went to Miramontez and Brown.

Mitch Enos won the 15 lap California Sharp Mini Late Model Main Event. Enos is a long time competitor in Late Models, Modifieds and Hobby Stocks, and he’s a driving force in trying to get this division started at Antioch.

Matt Malcolm has been competing in this division for a few years, and he drew on his experience to take the early lead ahead of Enos and DJ Saenz. Malcolm had won the six lap heat race earlier in the eThat’s aweesonvening. Halfway through the race, Malcolm’s motor began to sputter on him a little bit, and Enos closed the gap quickly. A low pass in Turn 4 of the 11th lap gained Enos the lead, and Malcolm spun in the same turn a lap later trying to regain the lead. On the restart lap, Malcolm spun again in the fourth turn, and Enos won ahead of Saenz and Malcolm.

Racing resumes this Saturday night with the IMCA Modifieds back in action along with the IMCA Sport Modifieds, Pacific Coast General Engineering Hobby Stocks and the return of the Super Stocks. For further information, go to www.antochspeedway.com.