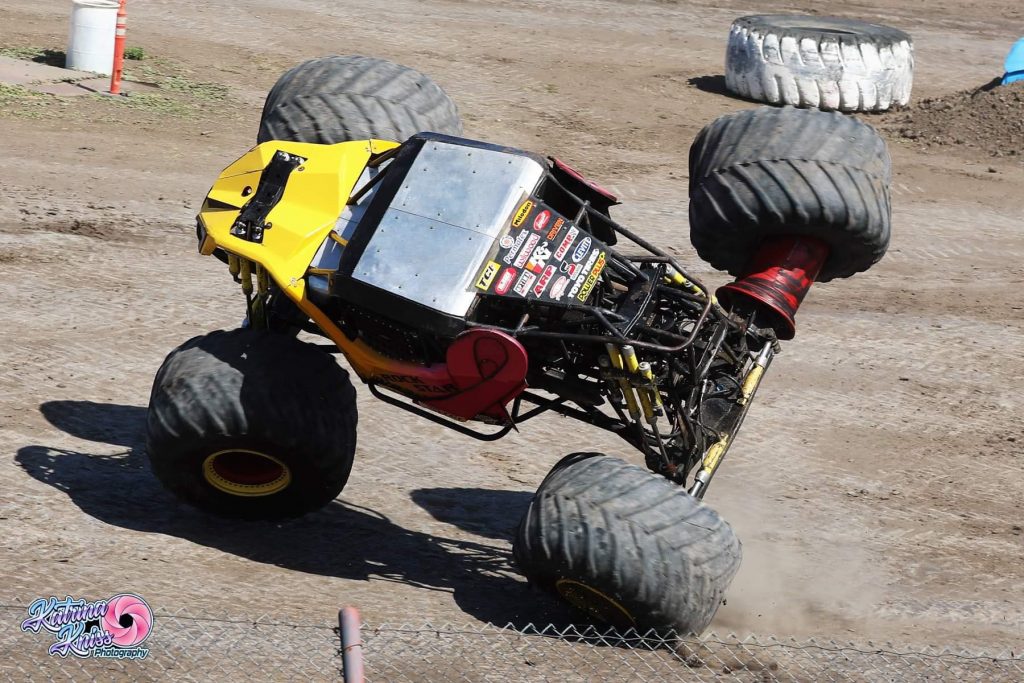 Antioch, CA…The Malicious Monster Truck Insanity Tour is in high demand on the West Coast. On Saturday night and Sunday afternoon, the fans at Antioch Speedway were given an example as to why. From the moment the music plays at the start of the festivities to the final ride-along for the fans at the conclusion of the program, they were entertained.

Antioch Speedway fans were given an induction to this exciting touring group last September. Promoters Chad and Tina Chadwick were so delighted by the response that they booked them on two-weekend occasions this year. This was the first one, and they will be back in town in September.

They bring two ride along trucks. One is named after one of their star attractions, Identity Theft The Ride. The other is Skeletor. Both proved to be very popular as rides were given prior to the start of the contest, during intermission, and then at the conclusion of the show. Everybody who wanted one was able to get a ride and feel what it’s like to be in one of these gargantuan machines.

Once Dallas, who expertly announces this program, got the fans on their feet, the five Monster Trucks went off in various directions at the same time to the delight of the crowd. Then, there was the introduction of the competitors on the front straightaway.

There is the dragon-themed Monster Truck called Spitfire. This truck actually shoots fire out its nose and is piloted expertly by Nick Jones of Chimacum WA. There’s also Weekend Warrior, driven by Myles Parker of Colfax, CA, the California Kid, driven by PJ Solorio of Paso Robles, CA, and Identity Theft, piloted by Dwight Mathews.

Some will correctly say that they are all the stars, but there is a little more love generated from the fans by Spitfire, Identity Theft, and immensely popular Rockstar. Rockstar is a unique truck in that it has two drivers, the husband and wife team of Bill and Lorna Payne of Port Orchard, WA. The duo is also the promoters of the tour itself.

The fans see a series of competitions, and there are three judges giving them scores. Dallas serves as one of them, there is also another judge in the booth and one on the track itself. The competition ranges from freestyle to time trials to one-on-one racing. Spitfire is known for the fire shooting out of the truck’s nose. Identity Theft does an impressive rear wheel stand, and Rockstar takes it up a notch as they stand it on its front wheels. That proves to be very popular with the fans as they roar their approval.
.
Dallas will go through the grandstands and find the rowdiest fans. Everybody is up on their feet as he hands out t-shirts throughout the night. He pretty much has the fans in his hands and is an expert in presenting these gargantuan, high-flying machines to the public. The fans are into it from the start as they pick their favorite trucks and cheer them on all night.

When it comes to freestyle, they hold nothing back. It takes a steady hand to pilot one of these big machines. One miscalculation and you land improperly from a jump and risk doing damage. You can end up on your roof. They don’t want that to happen as it means one less truck for the rest of the evening. They try to give the fans a little razzle-dazzle while also exercising caution when necessary. By the time they get to freestyle, nobody holds anything back.

The freestyle competition at the end of the night is what closes the competition. Therefore, if you put a little more into a jump at the conclusion of the night and land awkwardly, it’s damage that can be repaired for the next night. Every truck seems to take it up a notch.

Spitfire usually runs third and is raising the bar. Identity Theft takes it up even higher. Rockstar is probably the fan-favorite. You see more pink-colored “Breast Cancer Awareness” Rockstar shirts among the crowd in the stands. Bill and Lorna give it their all. They proved to be the winners on this occasion, but the real winners were the fans.

Saturday was the bigger night in terms of attendance. Some would compare the numbers to what was seen on a weekly basis in the grandstands back in the 1980s and before.

However, even the Sunday afternoon turnout was bigger than what you’d see on an average night. Management is doing things like this to create awareness and get more fans to come out to the show, and things are improving gradually.

While the show went well and the track looks forward to the September blank and blank visit, racing will return this Saturday night. On the Coco Farms Antioch Speedway Racing calendar for this Saturday night, we find a Mother’s Day Mini-Van race, and the other competing divisions will include IMCA Modifieds, and IMCA Sport Modifieds, along with the IMCA Stock Cars. For further information, go to www.antiochspeedway.com or go to the Antioch Speedway by PROmotions web page Facebook page.

The Monsters Are Coming!!!!