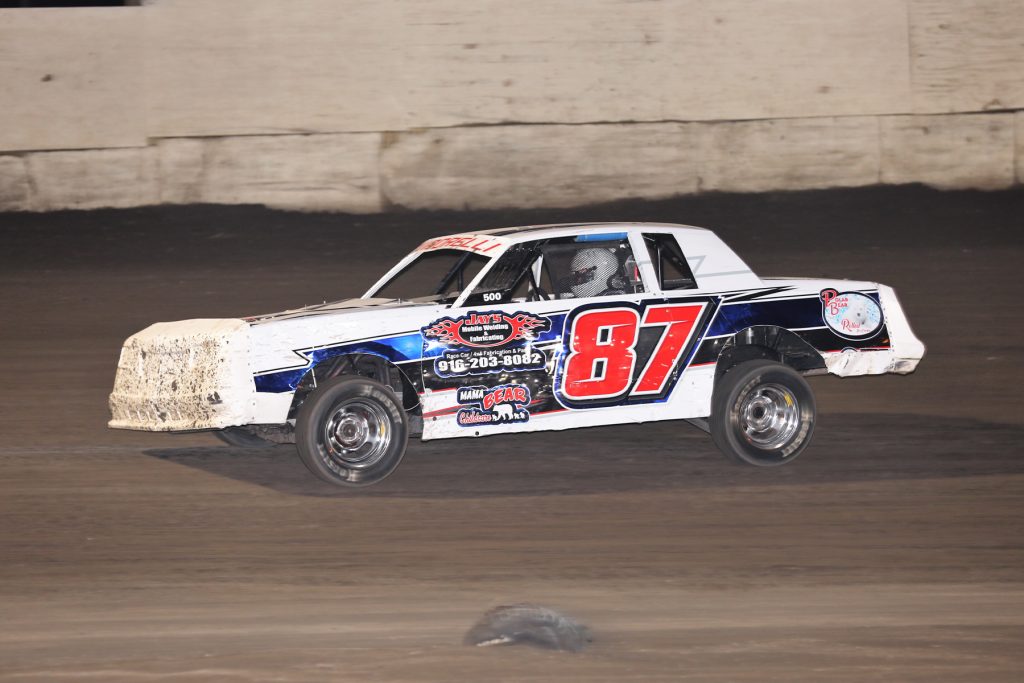 Stock Car racing is the name of the game this Saturday night at Antioch Speedway. In addition to the IMCA Modifieds, the IMCA Stock Cars will be back for their third appearance of the season, joined by the Pacific Coast General Engineering Hobby Stocks and the Super Stocks. It’s shaping up to be an exciting season so far, and we’re just getting started.

The IMCA Modifieds have been a wide-open battle. The three races held so far have found five-time champion Troy Foulger, Kellen Chadwick, and Nick DeCarlo each taking a trip to the Winner’s Circle. The common denominator in the point battle is that DeCarlo and Chadwick, one-time Antioch champions themselves, have been in the hunt at every race.

The standings find DeCarlo leading Chadwick by just two points, while 2016 champion Bobby Motts Jr is eight points out of the lead in third.

We haven’t seen Chadwick really competing for points at the speedway in quite some time. As the second-generation competitor became faster, he chose to take his talents on the road to compete for bigger money at other venues. This has led to him winning prestigious races such as the Beads Shipwreck Nationals at Grays Harbor in Washington, the R Charles Snyder Salute in Oregon as well as other big races in California. Chadwick even won the big $7,000 prize in the West Coast Nationals at Antioch in 2019. When the money is on the line, Kellen comes up big.

When he was younger, Kellen was also a fast competitor in the Outlaw Kart divisions, and he instantly developed a love for race cars. A scary incident in a Late Model could have ended his life and his career, but Chadwick is a tough competitor. After he recovered, he not only returned, but he remains one of the best IMCA Modified drivers on the West Coast. He also competes in the new IMCA Stock Car class and is a contender for that championship, piloting a car for Rich Quadrelli.

IMCA is better known for its Modified divisions, but the Stock Car class is catching fire in California. The consistency showed by Chadwick after two events have him just four markers behind leader Fred Ryland and one ahead of reigning champion Travis Dutra. Anthony Giuliani has done well to rank just eight points out of the lead and two ahead of Jason Robles, who got the win last time out. The Stock Cars are noteworthy for the side-by-side racing they’ve given the fans as this style of racing is just a little bit more thrilling than your average Hobby Stock race.

The Hobby Stocks are definitely delivering the excitement to the fans. Reigning division champion Larry McKinzie Jr could have ended up calling it a night after an incident between him and Jared Baugh in last week’s race. Larry restarted at the back of the pack. He kept at it and completed his charge to the front with a last-lap pass on Ken Johns for second. The glory went to Misty Welborn, who scored a popular second career win. McKinzie now leads 2020 Mini Stock champion Jess Paladino by 14 points and Welborn by 18.

Not to be forgotten in this battle are the tied Michaela Taylor and rookie Taylor DeCarlo, 22 points out of the lead. DeCarlo is the granddaughter of 80-year-old IMCA Modified competitor Terry DeCarlo Sr and the daughter of Top 5 Modified competitor Terry DeCarlo Jr. She’s been competing in Micro Sprints, but she decided to take on the challenge of the Hobby Stock and had a fifth-place finish last time out.

Much like DeCarlo, Michaela Taylor is a threat to win. She showed just how much she has improved over the last two seasons with her run at the front of the pack in the Main Event for several laps last week. Michaela is driving the #71 Hobby Stock, made famous by her grandmother, Debbie Clymens. In fact, Debbie has run as a passenger with her, which means 17-year-old Taylor is getting advice from an Antioch Speedway Hall of Famer. The way she’s looking, a Main Event win could be in her future.

Management has decided to give the Super Stock drivers an opportunity to rebuild the class. It was a little bit late notice for some of the drivers last time out, and reigning champion Jim Freethy beat 2020 champion Mike Walko to get the win. Walko has competed in Late Models and IMCA Modifieds at Antioch and did well in both divisions. Management has put out a call to drivers from neighboring Petaluma Speedway that they are welcome to come race with the Antioch competitors.

Local drivers Jimmy Robbins and Michael Burch are said to be preparing their cars to battle the likes of Chad Hammer and Joey Ridgeway Jr. Who might show up from Petaluma is unknown, but several drivers have expressed interest. Petaluma drivers have done well at Antioch in their visits through the years, and they certainly add to the excitement.

This Saturday night’s program starts with the gates opening at 3:00 pm. This is to accommodate a special $5 beer happy hour event at the south beer garden, which runs until 5:00 p.m. the first race will start at 6:00 pm.