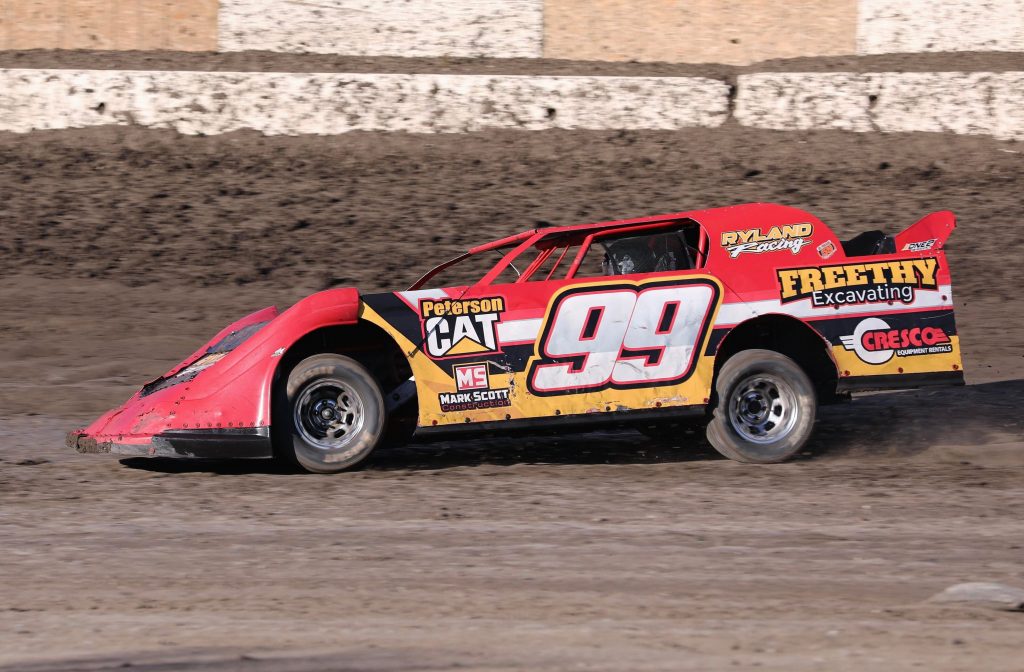 Antioch, CA…
News was dire for the Super Stock class last season when one night saw just four competitors show up to race and drivers were told that the division’s days were numbered. Some teams even decided to sell their cars. One driver was Lori Brown, who enjoyed running in the class and is a one-time champion. Some of the drivers who could support the show just tuned out at a certain point or towed down the road, so management made good on the threat and didn’t book them initially on the 2022 schedule.

However, two things changed. Drivers got together to map out a game plan that enabled them to get a limited championship schedule together. This was led by Jim Freethy. The other thing that changed was management’s outlook on the division.

They realized that if they could still get half a dozen to a dozen cars out of this class, it would help them on certain nights. Having 35 race dates to fill can be a challenge, and some people enjoyed watching these throwback cars to the Late Models of the 1980s and early 1990s.

Saturday night will be their first race, and they will be back the following Saturday. We have to go back to 2000 when this division was first added. Then Promoter John Soares wanted Late Model racing, but he couldn’t make an agreement with his father, who had Late Models at Petaluma.

What he decided was there were older Late Model chassis that last competed at Antioch in 1993, and they might be able to get enough of those cars to start what he called Super Stocks. An enthusiastic Ron Brown, the inaugural champion, set about finding older cars and getting them to people who wanted to run them.

The initial roster included such competitors as Brown, David Rosa, Jerry Harless, Chester Kniss, Dusty Green, Mike Gustafson, Brandi Ford, Clay Twigg, and George Connor, to name a few. The car counts started off a little bit slow for the first few years, but there was interest in this class from both Watsonville and Chowchilla.

Within a few years, Antioch was getting double-digit car counts as other competitors like Jeremy Petrell, John Asher, Jeff Silva, and Ty Duggins got involved. There was also the George Steitz sponsored series between Watsonville, Chowchilla, and Antioch.

Within four years, the division went putting car counts in the high teens on the track, and it ran that way for a few years before numbers started to decline. Ron Brown won a pair of championships, and his wife Lori was also a title winner. Gustafson picked up a couple of championships, and Duggins, Asher, and Silva also wrote their names into the record books as champions as well. The record will show that nobody has won more Main Events in this class than Gustafson, who still has a car.

At a certain point, the car count dwindled and management made the decision to merge the bigger Street Stock division with the fledgling Super Stocks. It was hoped that it would breathe new life into the efforts. Unfortunately, many of the Street Stock drivers parked, and it was still an eight to ten cars field by 2010. That began the era of Larry Damitz, who won five championships in a seven-year span, finishing second to Mitch Machado in 2010 and Jim Freethy in 2013. Damitz also racked up a pair of titles at Merced

At times, the division was able to get double digits. We weren’t just looking at old-style Late Models. This was the Street Stock division as it had evolved at several tracks. Hobby Stock ace Kimo Oreta joined the fray as did Mark Garner. Oreta picked up a pair of titles and Garner got one. The last solid year for the class was 2020 when longtime racer Mike Walko won his first championship in a nearly 40-year career. Walko will be another driver anticipated Saturday night.

Having a Super Stock division on the roster at Antioch gives the fans a glimpse of the Late Model style of racing without the Late Model budget. It also opens the door to the possibility of special big races that might bring drivers from Petaluma or elsewhere. It gives the drivers who still have cars an opportunity to race. Under normal circumstances, a division would just be dropped and all of those drivers would be left with cars that they may not even be able to sell.

Some of the drivers anticipated along with Freethy, Gustafson, and Walko include Chad Hammer, Joey Ridgeway, Michael Burch, and Ryan Cherezian. The Super Stocks will be part of Saturday’s show that will also include the IMCA Modifieds, IMCA Sport Modifieds, and Pacific Coast General Engineering Hobby Stocks. It’s sure to be an exciting night of racing, and it will be interesting to see how things go. For further information, go to www.antiohspeedway.com.